Under the heading of Conservation in Eastcote are a whole range of activities connected with the protection and enhancement of our local environment. Local members who are involved in Conservation are drawn from all areas of the Community with diverse interests in local history, plants and trees, preservation of buildings. Through members of the Residents Association, members of the Conservation Panel and Friends groups we help to look after and monitor activity in the following:-

The Conservation Panel or to give it its full title the Eastcote Village Conservation Area Advisory Panel through representatives is allowed to speak at North Planning Committee meetings, when applications are submitted which might affect Conservation Areas; both built environment and green spaces.

For three of the Parks local residents have formed up groups to help to look after the parks. These are:-

For the Contacts with each of these organisations please see above

In the book – The Development of the English Semi-detached House: 1750-1950 By PAMELA B LOFTHOUSE 2012 it says ‘the Housing Act 1923 offered some subsidies and incentives to speculative builders to build new estates. And as Alan Jackson (1991) describes in his book about suburban London, the massive expansion of the tram, railway and underground networks made it possible to live in a suburb and commute to work in the city. Suburbs of semis which were accessible by the London Metropolitan trains were known as Metroland (Figure 1). 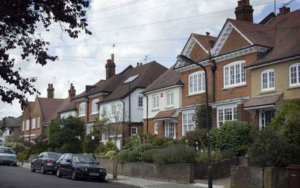 This combination of factors was a catalyst for a building boom which created countless new English interwar suburbs surrounding the cities and towns. Activity reached a peak during the late 1920s and early 1930s, a period when the speculative builders undertook every aspect of suburban estate development, “from the initial purchase and layout of the land, to marketing the houses and encouraging the maximum number of potential buyers” (Barrett and Phillips 1987, 20). Of the four million houses built during the interwar period, almost three quarters were constructed by private builders, with around 400,000 of those attracting a state subsidy (Jensen 2007, 150). Of the 2.9 million privately-built dwellings, 2.5 million were semis (Clapson 2008, 155).’